(Hong Kong, 17 March 2020) Xinyi Glass Holdings Limited (“Xinyi Glass” or the “Group”) (stock code: 00868. HK), a leading integrated automobile glass, energy saving architectural glass and high quality float glass manufacturer, has announced its annual results for the year ended 31 December 2019 (“ FY 2019 ”). In FY 2019 2019, rising prices of float glass in the second half of the year and optimised global strategic layout of the Group enabled it to counter the impact of trade war, and boost its overall operating result, thus its annual revenue, gross profit and net profit have recorded growth. The Group also continued to further pursue its strategy of introducing a more diversified, differentiated and high-value added product portfolio, in order to further consolidate its leading presence and tap opportunities when the industry heats up.

Dr. LEE Yin Yee, B.B.S., Chairman of Xinyi Glass, said, “The year 2019 was a challenging year for Xinyi Glass due to the slow progress in trade negotiations between China and the US, uncertainties in the global economy and the soft float glass price in the first half of the year. Despite the complicated operating environment, the Group was able to maintain stable growth of its business during the year under review and its three main business segments rebounded and delivered a satisfactory performance in the second half of the year. As the largest float glass manufacturer in Asia (in terms of production capacity), we boast competitive advantages in terms of advanced production technologies, strategically-located production complexes and economies of scale, allowing us to implement planned production capacity expansion in an orderly manner and hence form a solid foundation for future development”.

Business Review
Float Glass – Performance notably improved with prices of float glass starting to rebound since the second half of 2019
The price of float glass in Mainland China has been rebounding since it bottomed out in May 2019, driving the increase of the float glass business in the second half of the year and contributing to a 25.7% boost in revenue when compared with the first half. During the year under review, revenue of the float glass business was HK$7,963.4 million. Gross profit totaled HK$2,348.7 million and gross profit margin was 29.5%. The Group will continue to maintain its cost advantage and the profitability o f the float glass business by pursuing the development strategy aimed at creating a more diversified and differentiated product portfolio and further expanding its production capacity.

Automobile Glass - Stable overall business growth with overseas sales as a key growth driver
The Group has implemented flexible and dynamic marketing strategies for its automobile glass business to bolster its value added product portfolio as well as attract new overseas customers. Benefitting from the increase in car owner ship in North America and worldwide, as well as a respite in the trade war, the Group’s automobile glass business delivered satisfactory performance during the year under review. Revenue of this business grew by 5.9% to HK$4,502.6 million. Gross profit inc reased by 12.0% to HK$2,089. 4 million and gross profit margin also rose from 43.9% last year to 46.4%. The automobile glass aftermarket business remained stable amidst the trade war and global economic uncertainties. Overseas sales have also become a key growth driver during the year, reflecting that the strategy to expand the overseas customer base is beneficial to the Group’s long term healthy development.

Architectural Glass - Enjoyed economies of scale as the industry leader and delivered outstanding performance supported by the increase in property completion
The completion areas of properties in Mainland China has been showing year on year growth for months since August 2019, driving the increase in penetration of energy saving low emission (“Low E”) architectural glass. The Group’s architectural glass business recorded revenue growth of 20.9% when compared with the first half of the year. Its annual revenue rose by 13.6% to HK$3,792.5 million. Gross profit was up by 13.1% to HK$1,445.2 million and gr oss profit margin was 38.1%. The strong performance of the business segment was mainly attributable to the Chinese government’s effort to encourage the use of energy saving and environmental friendly construction materials which has boosted the demand for energy saving low emission coated architectural glass Another contributing factor was the continuous increase in the number of housing units under construction, which will turn into completion area in the coming quarters. Thus, the Group remains optimistic about the prospects of this business.

Geographic Market Analysis
During the year, the Greater China region remained as the Group’s largest geographical market, recording revenue of HK$11,190.2 million and accounting for 68.8% of total revenue. Revenue from overseas markets amounted to HK$5,068.3 million, up over 10% year on year. Benefitting from the growth in global car ownership and respite in the trade war, turnover from Europe and North America significantly increased by 30.1% and 20.2% to HK$664. 1 million and HK$1,949.1 million respectively, making up 16.1% of the Group’s total revenue.

Prospects
Looking ahead, the Group will continue to actively deepen its business strategy of diversifying and differentiating its high value added product portfolio to enhance overall gross profit margin of its products.

Entering 2020, the trend of weaker soda ash prices is expected to lead to greater growth potential for profit. Besides, the market expects that the supply and demand of float glass will become stabilised and the rigid demand will continue to be released. Hence, the Group is cautiously optimistic about the performance of its float glass business in the coming year. It will continue to implement its planned production capacity expansion in an orderly manner. Consequently, the annual production capacity of float glass will increase from 5.6 million tonnes to 6.2 million tonnes. Moreover, the automobile glass production line invested in and constructed by the Group in Beihai, Guangxi and Malaysia is expected to rise the Group’s aftermarket annual production volume to 20 million pieces.

Dr. LEE concluded, “Stepping into 2020, the novel coronavirus epidemic outbreak has impacted China as well as the world in all aspects. At present, the factories of Xinyi Glass in the Mainland have resumed production, with an overall productivity similar to that of the same period last year. Our management believes that the effect of the epidemic outbreak on the Group is certainly under control . Plus as the first quarter is traditionally our slow season, the impact of the novel coronavirus epidemic outbreak on the annual sales is expected to be limited. Meanwhile, as favourable factors such as the trend of weaker soda ash prices and accelerated completion of property projects are becoming apparent, the management remains optimistic about the prospects of the Group’s businesses owing to its industry leading position and well located production bases offering strategic geographical advantages and economies of scale. These advantages deliver economic benefits through its vertically integrated operations model and globalisation strategy. The Group is ready to capture the opportunities arising from the recovery of the industry”. 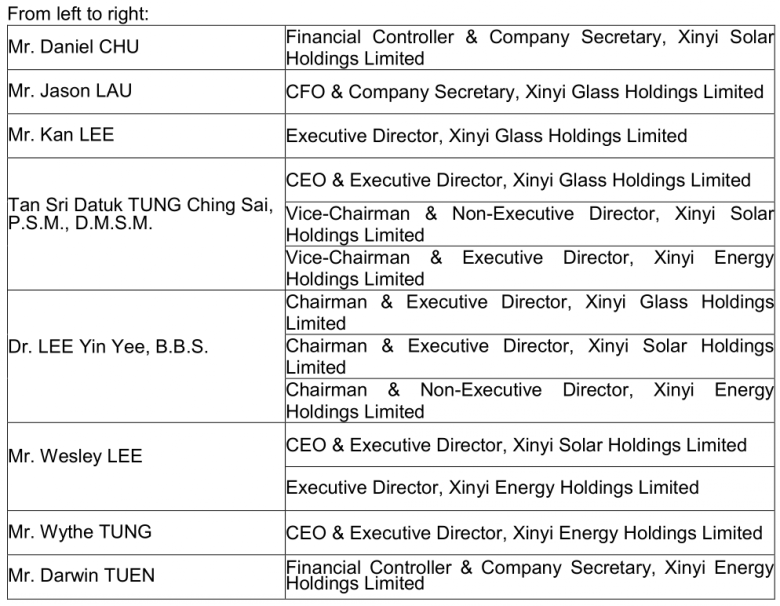